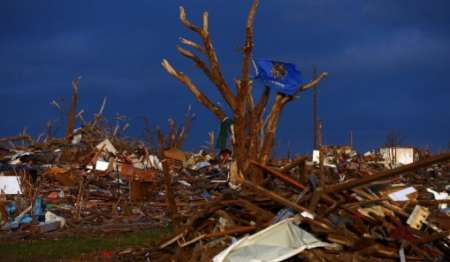 Tornadoes killed five people in central Oklahoma including a mother and her baby and menaced Oklahoma City and its hard-hit suburb of Moore, before the storm system tracked northeast early on Saturday.

The National Weather Service said the severe weather threat would shift into neighboring Illinois and Missouri, where Governor Jay Nixon declared a state of emergency on Friday.

The tornadoes struck just 11 days after a twister ranked as EF5, the most powerful ranking possible, tore through Moore and killed 24 people.

The mother and baby were killed on Friday while traveling on Interstate 40, just west of Oklahoma City, when their vehicle was picked up by the storm and they were sucked out of it, said Betsy Randolph, spokeswoman for the Oklahoma Highway Patrol.