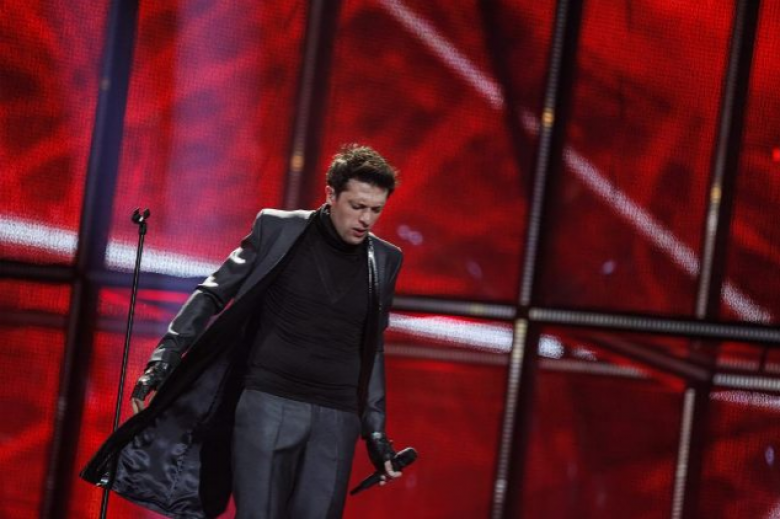 Within the framework of “Eurovision 2014” Copenhagen held the second rehearsal of Armenia’s delegate Aram MP3. Armenpress reports citing the official eurovision.tv website of the contest that Aram MP3was wearing his stage clothes for the first time - a dark grey coat with an diamond-shaped brooch in the colours of the Armenian flag, black gloves and black boots. "We are still making our minds up if I should have a grey shirt or a black one, but I like the black one more", he said before proceeding to his soundcheck. On stage, the wind machine was used, giving the impression that Aram is facing a storm during his chorus, with his coat fluttering. He was performing all alone, without backing artists, delivering a strong vocal performance.
Pyrotechnical effects are also used to underline the strong message of the song: vertical flames appeared in front of him at the same time as the arrangement of Not Alone picks up in strength.

At that very moment, the light scenery on the backdrop also brightens up, with pulsating elements. This year's Eurovision Song Contest will be held at the B&W Hallerne in Copenhagen, Denmark, on the 6th, 8th and 10th of May and is hosted by the Danish EBU Member DR. Last year, the three shows reached some 180 million people across Europe, as well as in Australia, Kazakhstan
and China. The Armenian representative Aram Mp3 is one of the most beloved personalities of the Armenian show business. He is not only well-known as the singer but also as the comedian and showman. The singer is mostly famous for his live performances. He has a very unique style of covering the international hits and comedies. Aram MP3 will perform on May 6. Born in Armenia's capital Yerevan, Sargsyan attended the Yerevan State Medical University and graduated in 2006. During his study at the YSMU, he played in the KVN comedy show, first among Armenian universities and later in the Armenian team Ararat in Moscow. In 2006, Aram joined several other comedians—largely unknown to the public—to form 32 Atam (32 Teeth) stand-up comedy show. During his first years in 32 Atam he often performed humorous covers of popular songs earning the nickname "Aram Mp3", referring the common audio format MP3. Its members split in 2010 with Aram and his friends creating Vitamin Club. He has since hosted several shows in Armenian TV. On 31 December 2013, Aram Mp3 was selected by Armenian First Channel to represent Armenia at the Eurovision Song Contest 2014 in Denmark. The contest entry song will be revealed on February 2014.

Film dedicated to Monte Melkonian will be shown in Sochi

Down and out in NYC: Richard Gere rifles through trash cans in scruffy clothes... but don't worry, it's only for a new movie
Հետևե՛ք