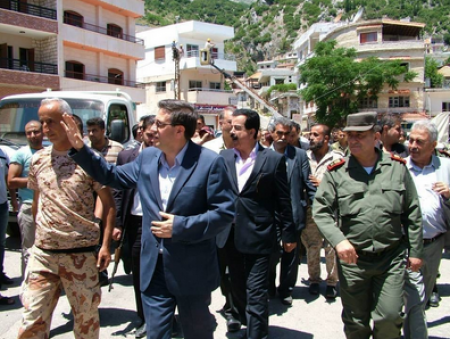 Kessab Mayor Vazgen Chaparyan announced that 250 immigrant families have already returned to the city of Kessab, and the others are waiting for the restoration of the basic services to return. As reports “Armenpress”, in reference to the Syrian SANA agency, he thanked the Syrian army for restoring stability in Kessab and all the regions of Syria.

On the other hand, Latakia Governor Ahmed Sheikh Abdul Qadir urged the corresponding bodies and institutions to restore the water supply, electricity, communication means and cleanliness of Kessab as quickly as possible, then demanded to provide the return of the residents to the rural town. The Governor and other officials personally visited Kessab, to get closely acquainted with the level of damage caused to the shops, apartments, cultural centers, including the Armenian Misakyan cultural center built 170 years ago, as well as burned and destroyed four Armenian churches.

Այս թեմայով The celebration of “Erebuni-Yerevan 2797” stands out with unprecedented social action: about 30 flats have been granted to the families of azatamartiks Yerevan Municipality for Syrian Armenian families Government to ease energy tariff rise effects to socially needy families Five Syrian Armenian families to get apartments in New Year In Church of Latakia funeral service of Kessab Armenian Gevorg Juryan to be held
Լրահոս
28 Feb