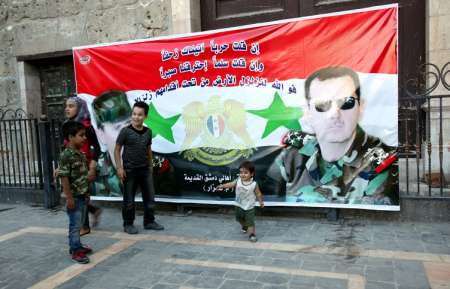 Syrian incumbent President Bashar Assad was sworn in for another seven-year presidential term on Wednesday following his landslide election victory last month.
Addressing the parliament after the swear-in ceremony in his inauguration speech, Assad pledged to firmly stand for the interests of Syrian people, protect his country’s sovereignty and press for the unity of the Arab nation.
The 48-year-old president, who has been ruling the country since 2000, also warned that all those supporting terror against Syria would “pay a high price.”
“Recent dangerous developments in Iraq prove that the reality of inter-denominational split in the region is still lingering,” Assad said. “The conspiracy spread beyond the Syrian borders and terror and religious extremism are spreading across the Middle East.”

The June 3 presidential election in Syria saw Assad win a third term in the office after he garnered 88.7% of the vote with the voter turnout standing at 73.42%
For the first time ever the head of state was elected on a contested basis, and not through a referendum in support of the existing authorities, contrary to what was the case before.
In the final communique, the international observers recognized the election as legitimate. Among them were MPs from Russia, Iran, Brazil, Venezuela, North Korea, Tajikistan, the Philippines, Uganda, as well as delegates from Canada, the US, Ireland, Pakistan, Malaysia and Bahrein.
The G7 summit communique, however, released in Brussels on June 4 denounced the election as “sham” and promised “no future for Assad in Syria”. The signatories expressed support for “commitment of the National Coalition and Free Syrian Army to uphold international law”.
The US Secretary of State John Kerry announced the election was useless with a zero result. Many a politician in Washington proposes to expand support for the opposition, in particular with advanced surface-to-air missile system supplies.

The election was held in a bid to ease the bloody civil war, which gripped the country over three years ago beginning with anti-government protests.
Fighting between Syrian government troops and militants has left over 100,000 people dead and displaced millions since its start in March of 2011, according to UN statistics.
The first two rounds of an international peace conference on Syria, dubbed Geneva-2, organized by Russia and the United States and designed to negotiate a solution to the Syrian crisis, brought no particular progress in January and February. The parties to the Syrian conflict agreed to continue their discussions.