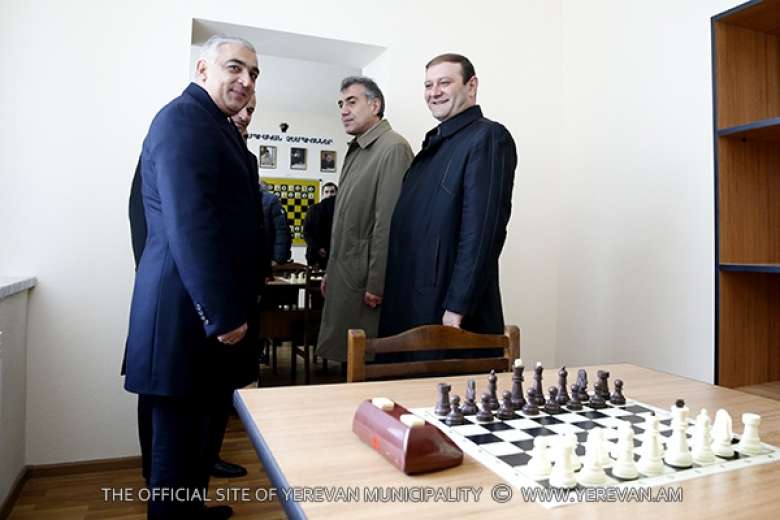 The Mayor of Yerevan, president of Yerevan Chess Federation Taron Margaryan together with the first deputy of the president of the Armenian Chess Federation Smbat Lputyan took part in the ceremonies of opening new chess schools in the capital.
All necessary conditions have been provided for about 800 chess loving children from Nor Nork, Erebuni and Kentron districts. The new schools have well-equipped rooms and assembly halls, all appropriate facilities. Accompanied by the persons in charge Taron Margaryan walked about the new schools, familiarized himself with the work done.

"We have completed the activities scheduled for 2014 and put into operation the 5 schools we planned to open in the capital. Thus the number of chess schools functioning in Davtashen, Ajapnyak and Avan has been completed with the ones opened in Erebuni, Nor Nork, Arabkir, Malatia Sebastia and Kentron districts and I consider it to be a good achievement directed at the development of this kind of sport. I am sure that the children attending these schools will go on upholding the honour of the capital and the country. Our aim is to have chess schools in all 12 administrative districts and both as the Mayor of Yerevan and as the president of Yerevan Chess Federation I assure you that we will realize this program. I'd like to stress once again that all the chess schools which have been opened are to be opened to promote chess development will work free of charge", said Taron Margaryan.
Highly appreciating the activity of the Yerevan Chess Federation the first deputy of the president of the Armenian Chess Federation Smbat Lputyan noted that a lot of work has been carrying out to promote chess development in the capital. «I am really happy today as I see the special attitude to our future, our children and out thought. I should confess that though chess was attached importance in my childhood there wasn’t such care and such conditions as we have today. Such conditions are really significant particularly taking into account that nowhere else they are provided with the same intense», said Smbat Lputyan.
It should be noted that all the chess schools are provide with necessary equipment. The persons in charge pointed out that due to increasing the number of chess schools in the capital the number of chess loving children and young people has increased as well.

Information and Public Relations Department of the Municipality of Yerevan