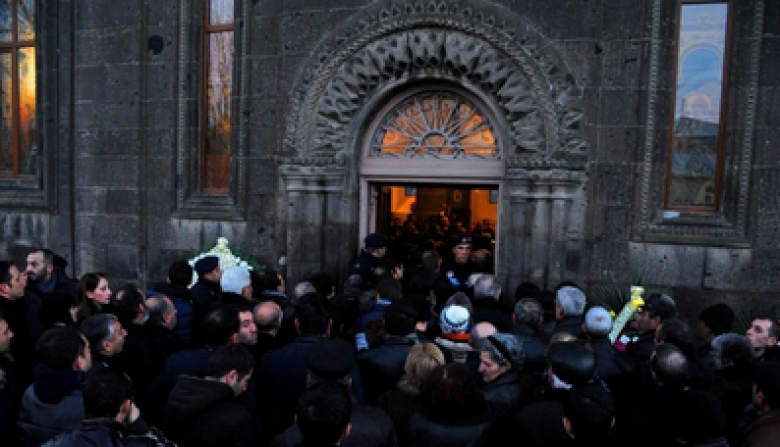 Thousands of Gyumri people gathered at the Saint Nshan Church in the second largest city of Armenia to bid the last farewell to the 6­month­old Seryozha Avetisyan. Armenpress correspondent reports that the funeral ceremony of the child was attended by the Vice Presidents of the National Assembly of the Republic of Armenia Eduard Sharmazanov and Hermine Naghdalyan, many deputies, public and cultural figures. The burial service of Seryozha Avetisyan will be held at Shirak Cemetery, next to his relatives.

Earlier it was reported that the Head of the Russia’s Investigative Committee Alexander Bastrykin and the Head of the Investigative Committee of the Republic of Armenia Aghvan Hovsepyan agreed to jointly investigate the murder of the seven members of one family in Gyumri, the accused of which is a Russian serviceman. Alexander Bastrykin and Aghvan Hovsepyan agreed to jointly cooperate in the criminal case and to carry out comprehensive, thorough and impartial investigation, which was initiated by the two countries.

The six members of the Avetisyan family were shot and killed in Gyumri at around 6 a.m. on January 12, 2015. The only survivor was 6­month old Seryozha Avetisyan, who was transferred to a hospital with injuries caused by a cutting and piercing tool. The child’s health condition became worse on January 19. There was severe renal insufficiency and cardiac insufficiency, and doctors weren’t able to save his life. Soldier of the 102nd Russian military base stationed in Gyumri, Valery Permyakov is charged with killing the members of the Avetisyan family and causing numerous injuries to little Seryozha. Russian border guards found him when he was trying to cross the Armenian­Turkish border and handed him over to the commanders of the 102nd Russian military base. Permyakov has confessed his crime.

After fighting for his life and undergoing several difficult surgeries for a week, six­month old Seryozha Avetisyan also died on January 19.

Little Seryozha’s body to be transferred to Gyumri

Naftogaz gets bids on reverse gas supplies via Slovakia
Հետևե՛ք