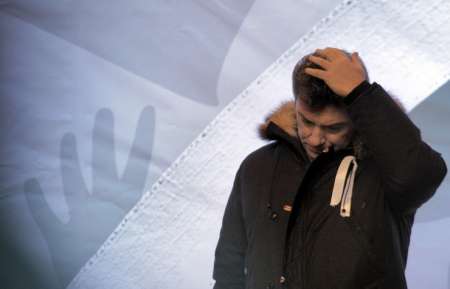 Russian opposition and state figure, deputy of a regional legislature, the Yaroslavl city duma, Boris Nemtsov, was shot dead in downtown Moscow overnight to Saturday with four shots from a handgun from a car passing by him, law enforcement agencies said.
According to preliminary data, an unknown assailant made a few shots at Nemtsov when the latter was walking along the Bolshoy Moskvoretsky Bridge.

Nemtsov was a co-chair of the RPR-Parnas party. He had held a number of government positions in the 1990s.
Investigation
Russia’s Investigative Committee has opened a criminal case into the killing under articles 105 (murder) and 222 (illegal arms turnover) of the Russian Criminal Code.

A law enforcement source said the murderer of Nemtsov had been spying on him.
Alexeyeva said manhunt activities were underway. The attacker escaped inside a white car, whose make is not named in the interests of the investigation.

"Nemtsov was walking with his female acquaintance who had arrived from Ukraine. They were strolling from St. Basil’s Cathedral toward the Bolotnaya Square," she said.

Investigators are currently questioning the woman who was walking side by side with him at the moment of the murder, but her identity is not disclosed in the interests of investigation either.
Senior aide to the head of the Main Investigative Department in Moscow Yulia Ivanova told TASS Investigators are considering all versions when probing into the murder and do not rule out it was a contract killing.
President Putin, PM Medvedev: reaction
Russian President Vladimir Putin was "immediately informed of Nemtsov’s murder in Moscow," and "the head of state instructed heads of the Russian Investigative Committee, Interior Ministry and Federal Security Service [FSB] to establish an investigative group and personally control the course of the crime’s investigation," Putin’s spokesman said Saturday.
"Putin noted that the violent murder bears the marks of a contract killing and is purely provocative," Dmitry Peskov said.
"The Russian president expresses deep condolences to the near and dear of Boris Nemtsov who tragically died," Peskov said.
Russian Prime Minister Dmitry Medvedev has expressed deep sincere condolences to the near and dear of Nemtsov, Medvedev’s spokeswoman Natalya Timakova said Saturday.

Deputies, politicians to closely follow investigation
Deputy speaker of the State Duma, the lower house of Russia’s parliament, Sergey Neverov said Saturday lawmakers will thoroughly follow the investigation into the murder of Nemtsov.
"I express condolences to all near and dear of Boris Nemtsov. I knew him personally as deputy prime minister in charge of the fuel and energy sector, as a deputy of the third-convocation State Duma. He was a lawmaker at the Yaroslavl regional duma," Neverov said.
"This was an insolent crime committed in the center of Moscow. And as State Duma lawmakers, we will closely follow the course of the investigation and I don’t doubt the criminals will be established and brought to justice," he said.

Yabloko party leader Sergey Mitrokhin called on Russian President Vladimir Putin to take Nemtsov’s murder under personal control. "This monstrous crime is connected with Boris Nemtsov’s political activity. This is a challenge to the opposition and the country’s leadership," he said.

Former finance minister Alexey Kudrin said Nemtsov’s murder is a tragedy for Russia. "It should be solved whatever it takes," Kudrin wrote on his Twitter page.
Former chairman of the RPR-Parnas party, one of whose leaders Nemtsov had been, Vladimir Ryzhkov, told TASS that he was shocked at what had happened.
"This is the third case after the murders of Galina Starovoitova and Sergey Yushenkov - the murder of a federal-scale politician," he said.

"The decision was adopted to cancel the March 1 march and appoint a mourning march in downtown Moscow," Kasyanov said. "We are interacting with the Moscow city hall on the issue."