Protestors turned down offer to move to Freedom Square 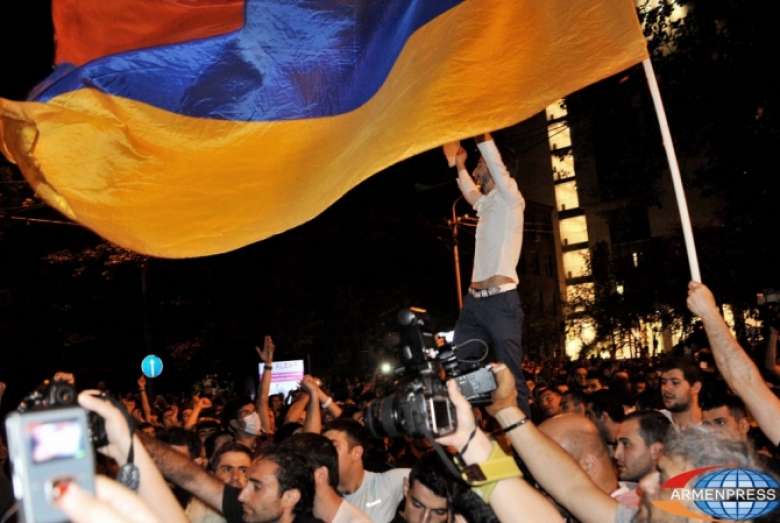 Protestors who closed Baghramyan Avenue again turned down the offer to move to the Freedom Square. The police promise to give warranty that their demonstration will not be hindered in the Freedom Square. Still, the protestors didn’t agree even to negotiate on this issue. The police have already informed that they will take no actions. There are former and present MPs, intellectuals, representatives of show business, lawyers, journalists and clergymen who arrived at the protest sight at night in order
to form a living wall between the protestors and police.

237 citizens protesting against electricity price hike were arrested from Baghramyan Avenue and the territory near the Liberty Square on June 23 for violating the public order. During long negotiations on June 23, the police of the Republic of Armenia suggested the protesters leaving the protest sight in order to restore the public order. It was also announced for a few times through a loudspeaker that the President of the Republic of Armenia is eager to listen to the protesters’ demands. However, the demonstrators turned down the offer to meet with the President.

As it is mentioned in the statement provided to Armenpress by the Public Relations and Information Department of the Police of the Republic of Armenia, the organizers of the march also turned down the admonishments and requests of the police. Guided by the laws of the Republic of Armenia, the police applied to the organizers of the protest with the demand to stop the illegal march but the organizers didn’t obey. The police warned that in case of disobeying the lawful requirements of the police or counteraction, the march will no longer be considered peaceful and will be stopped. The police suggested the protestors returned to Liberty Square and continued their protest action there but this suggestion yielded no result. The police used physical force and special measures towards the violators. The police dispersed the demonstration by using water cannon, and detained a number of activists and journalists protesting against the increase in the electricity price.