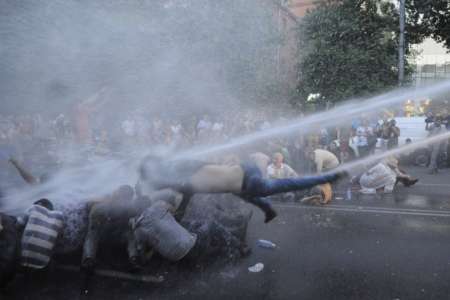 Street protests that have engulfed Armenia's capital, unsettled Russia and raised the concern of rights groups were poised to continue as the government refused demonstrator's demand to reverse a rise in electricity prices.

Thousands of people blocked Yerevan's main street, the Marshal Baghramyan Avenue, for a fourth consecutive day divided from police by a barricade of trash containers.

Prime Minister Hovik Abrahamyan told a cabinet meeting the rally was unconstitutional, urging protest leaders to "return to a constructive field", while at the same time stressing the necessity of the 17% increase in electricity bills that sparked the demonstrations.

The rise – the third in three years – was approved earlier in June upon the request of national electricity company Electric Networks of Armenia, which was struggling to cope with debts and financial losses.

Protesters claiming poor management and misuse of funds were to blame for the company's troubles initially gathered in central Liberty Square, under the umbrella of the non-political "No To Plunder" group.

Demands to cancel the increase

On 22 June, demonstrators marched on the presidential palace to demand President Serzh Sargsyan cancel the increase. Stopped by police, they settled in Marshal Baghramyan Avenue. A day later, clashes erupted as security forces moved in to clear the street.

Footage from the scene showed authorities using water cannons on seated demonstrators, while plainclothes officers, some wearing a police armband, were seen beating protesters or dragging them behind police lines.

Reporters were also targeted, with some detained and other lamenting they had cameras smashed or confiscated.

Human Rights Watch (HRW) urged the government to open an investigation into the violence, saying abuses might have occurred.

"Even if the Yerevan demonstration was unauthorised, nothing can justify physical attacks on largely peaceful demonstrators and journalists covering the protests," said Giorgi Gogia, HRW senior South Caucasus researcher.

A day after the violence, demonstrators were back into the streets.

The continuing unrest has worried Russia, which has a military base in Armenia and is the country's main economic partner and ally. Moreover, Electric Networks of Armenia, is controlled by Russia's electricity giant, RAO UES.

Moscow official stance has been calm, with the Foreign Ministry urging the government to find a settlement with the demonstrators in an attempt to defuse tensions.

On the flanks, though, the Kremlin propaganda machine has started crying foul, suggesting the unrest might have been instigated by the US in to bring the ex-Soviet nation out of Russia's sphere of influence.

Igor Morozov, a Russian MP sitting in the Federation Council's International Relations Committee, linked Yerevan protests to the pro-European demonstrations in Ukraine that eventually swelled into a revolution leading to the current crisis.

"The US Embassy in Armenia is actively involved in the current events in Yerevan," Morozov told RIA Novosti failing to provide any evidence. "Armenia is now close to a coup d'état with use of firearms".

Russia's English-language news website Sputnik also fuelled the conspiracy theory. In one article, the state-run outlet claimed that, similar to what happened during protests in Kiev, security forces' tactics in Yerevan were "strangely inconsistent", without elaborating.

In another piece, Sputnik vaguely linked the rise in electricity prices to the recent purchase of a large hydroelectric power complex by a US company.

The deal is likely to lessen Yerevan's dependence on Russia but is not clear how it could have influenced the decision of Electric Networks of Armenia to raise electricity prices.

At the cabinet meeting, Abrahamyan said reasons for the increase were a water shortage that affected energy production, issues at a nuclear plant that caused it to halt for almost three months in and the devaluation of the national currency.

In a move to soothe tensions, he said the government was ready to offer compensations against the price rises to vulnerable households.

Protest representatives have turned down an offer from Sargsyan to meet and discuss a way out of the stand-off.