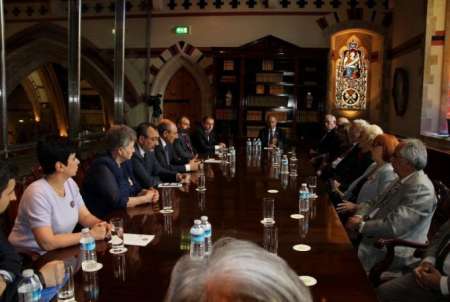 On 6 July the delegation, headed by the President of the Nagorno Karabakh Republic Bako Sahakyan, arrived in Great Britain with a
working visit. The press service of the Artsakh President’s Office informed Armenpress that on 7 July President Sahakyan had a
meeting in the capital of Great Britain with the members of the Armenian Community Council and discussed issues related to the
development of ties between the local Armenian community and Artsakh.

On the same day the Head of the State met with the representatives of the Armenian Community of Great Britain at the London's St. Yeghichè Armenian Church.

In a warm and friendly atmosphere the President provided information about life in Artsakh, its accomplishments and the existing issues as well as responded to the raised questions.

According to Bako Sahakyan the Armenian Community of Great Britain plays an active role in the life of the UK, the Diaspora and the historic Homeland.

The President expressed gratitude to the community's representatives for their patriotism and devotion to the native people.

Ambassador extraordinary and plenipotentiary of the Republic of Armenia to the United Kingdom and Northern Ireland Armen Sargsyan, Primate of the British diocese of the Armenian Apostolic Church Bishop Hovakim Manukian and other officials attended the meeting