Armenia National Assembly four­day session: The draft decision on Ombudsman's election will be put to vote 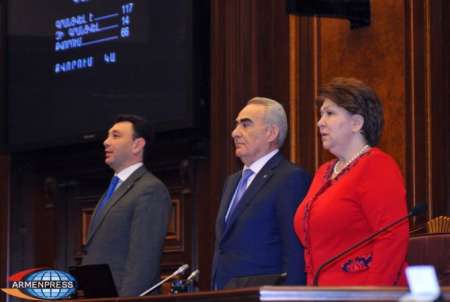 The four­day sitting of the 9th session started in the National Assembly of Armenia. “Armenpress” reports that 113 MPs were registered. At the beginning of the session issues discussed in previous session will be put to the vote.

MPs discussed during the session of February 1 the draft decision on “making amendments to the 2012 May 31 decision of the National Assembly of the Armenian Republic and on the order of proposing a National Assembly candidate for the position of Ombudsman”.

The draft law defines that the Standing Committee on State and Legal Affairs is authorized to offer a Candidate for Ombudsman to the National Assembly, particularly taking into consideration the role of that committee in constitutional reforms, in the formation of state bodies, as well as in the process of reforming legislative acts. The draft law also defines the order and deadlines of the submission of applications for the Ombudsman candidates. The Mps finished the discussion of the issue. The voting will take place at the beginning of the session on February 2.