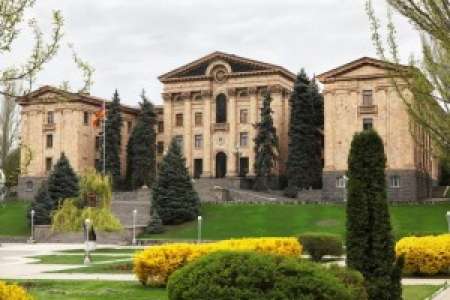 The National Assembly of the Republic of Armenia strongly condemns the unprecedented escalation of the situation by Azerbaijan along the Line of Contact with Nagorno Karabakh. During the night of April 1-2, the Azerbaijani army resumed large-scale military operations. In 1994, after the trilateral ceasefire signed between Nagorno Karabakh, Azerbaijan and Armenia, for the first time the use of large quantities of heavy weapon, bombarding of the peaceful settlements of Nagorno Karabakh, targeting of the substructures deep in Nagorno Karabakh obviously show that Baku is on its short-sighted and dangerous way to bring to life its illusion to settle the conflict through military means. Azerbaijan’s adventurist policy caused many casualties, including civilians. The right to secure life of Nagorno Karabakh people is endangered. Azerbaijan’s terrorist policy is a serious threat for the security of the whole region.

Azerbaijan’s dictatorial regime, suffering from the obsession to retain its power at any cost, tries to distract its attention and that of international communities from domestic problems, sacrificing human lives.

We express our deepest condolences to the servicemen and the family members of the civilians perished in defensive battles, their close relatives and co-servicemen, share the grave grief of their loss, and wish quick recovery to the wounded.

We highly assess the operations of the Defensive Army of Nagorno Karabakh directed to the stabilisation of the situation, the Armenian soldiers’ combat readiness, their selflessness and courage shown in defending the Motherland, as well as the consolidation and unity of our society.

We condemn the breach of the 1994 Ceasefire Treaty by Azerbaijan, the violation of the Artsakh people’s right to live in peace, the targeting of the civilian population and settlements, the purposeful failure and denial of the efforts aimed at the solution of the problem by the internationally accepted format of the OSCE Minsk Group Co-Chairs and the policy of settling the Nagorno Karabakh conflict through military means.

We call on the OSCE Minsk Group Co-Chairs and the international organizations to targetedly and adequately respond to the Azerbaijani party responsible for the created situation, applying all the restraining mechanisms towards the aggressor for avoiding the further escalation and steps destabilizing the region.

We expect our colleagues to raise their voice of complaint, condemning Baku’s terrorist policy and to join the efforts of the international community in unleashing the Azerbaijani authorities.