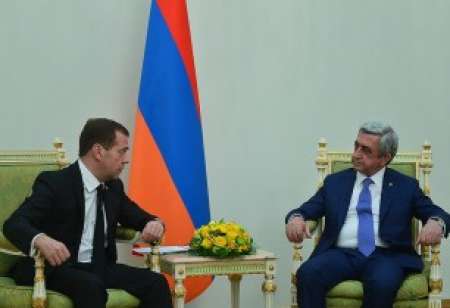 Upon his return from Berlin, late in the evening of April 7 President Serzh Sargsyan received the Chairman of the Government of the Russian Federation Dmitri Medvedev, who has arrived to Armenia on official visit.

“Distinguished Mr. Medvedev, I am glad to welcome you in Yerevan. Your official visit is the perfect opportunity to discuss a wide range of issues of our bilateral agenda. Unfortunately, your visit is taking place in the period when Azerbaijan has tried once again to reach the settlement of the NK issue through military means. A large-scale operation has been launched with the employment of their entire arsenal. Painfully, the arms have been used against the peaceful population; children have been killed, as well as elderly people, but thanks to the professional actions of the troops and commanders, the attempt was thwarted. Mr. Medvedev, I am sure you know that the fact that the Azeris have used the entire force weapons they have acquired recently from Russia strongly resonated in Armenia. It is quite understandable since at the public level in Armenia Russia is perceived as the closest ally and friend. Today, we cannot rule out a possibility of yet another threat because yesterday and also today these provocations in mass media continue and we, of course, have no great illusions. Nevertheless we anticipate from the Co-Chairs of the Minsk Group and our allies targeted statements and certain actions, because the second phase, I believe will result in a large-scale operation since from the very beginning we, as a party of the 1994 Ceasefire Agreement, couldn’t stay away from all this. And of course, Mr. Medvedev, we regret that some of our EEU partners refused to come to Yerevan to participate in the previously scheduled event. I don’t know if they helped Azerbaijan with this, but they have definitely tarnished the reputation of our Organization, and it’s a fact,” said President Serzh Sargsyan.

“Thank you very much, Mr. President. It is a good chance indeed to exchange impressions and information regarding our routine bilateral issues. I would like to inform that we have conducted negotiations to discuss the entire spectrum of our economic cooperation, and signed, I believe, important documents aimed into future, reached agreement on different issues, including a complex issue, disputable and important issues such as, for instance, gas price, which, in my opinion is important for Armenia’s sustainable development. I believe, we will again briefly negotiate some issues with you.
I have to admit that the agreed official visit of the governmental delegation is taking place in a very difficult period of time, but we didn’t change our plans. We consider it our obligation, as Armenia’s partner, to receive information, as it’s said, firsthand and understand what’s going on and, of course, do everything we can as a partner, as an ally and a member of the Minsk Group so that the situation develops according to a peaceful scenario. We believe that the most important thing at the moment is to uphold peace and to return to the table of negotiations, even disregarding the fact that the background of these negotiations is not the best, to say the least. I remember well our previous conversations. Probably at that time, some of the opportunities were missed; however peaceful negotiations and discussions have no alternative. This is also the purpose of my present visit, and I would like to discuss with you what can be done in the nearest future. As for the postponement of the meeting of the EEU Heads of Governments, I hope, I am confident that there will be no interruption anyway. I will certainly speak to our EEU partners. To some extend their attitude and decisions are probably understandable: not all are well-informed on the current situation, on what can happen, or what will happen. The most important thing now is keep the pace and to avoid creation of artificial problems. For that very reason, today when we are discussing the future of integration processes, we agreed that in the shortest possible time we would try to organize the session of the Heads of Government in Yerevan, as we were planning to, because to be honest, we meet infrequently. We agreed to meet once in two months, however last time we met was six months ago. For that very reason, I would like to increase the frequency, moreover so because of the disappointment present here, in Armenia with regard to the cancelation of the April 8 meeting. At any rate, I am very grateful for the invitation. We have conducted today’s intergovernmental negotiations with great interest. I hope now, we will discuss with you all issues. Thank you,” said Dmitri Medvedev.