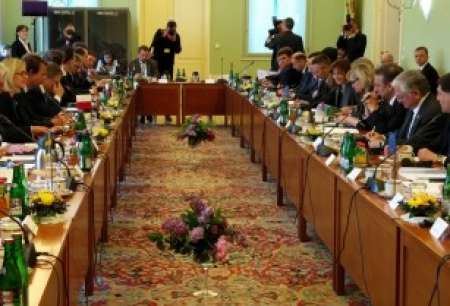 His full address, issued by the Foreign Ministry’s press service, is provided below.

I would like to thank the Visegrad Four Czech Presidency and Lubomir for hosting this ministerial meeting.

Last year we had an opportunity to host in Yerevan the representatives of the ministries of foreign affairs of the V4 countries to discuss the possibilities of deepening of Armenia-V4 ties.

2015 was a special year for the Armenia-EU cooperation including intensive dialogue and high-level visits. The launch of the negotiations on the future Armenia - EU framework agreement last December will enable us to lay a new legal foundation for our relations. Armenia has joined or is in the process of joining a number of the EU programs: COSME, Horizon 2020, Creative Europe. We look forward to start soon visa liberalization dialogue and negotiations on the Aviation agreement.

Riga Summit Joint Declaration reaffirmed our shared vision of the Partnership based on common values, mutual interests and commitments. The Summit also reiterated full support to the efforts by the co-chairs of the Minsk Group on the peaceful negotiated solution of the Nagorno-Karabakh conflict, based on the five statements of Presidents of the Minsk group Co-chair countries adopted since 2009. We all remember how Azerbaijan tried to block the entire Riga Summit declaration because of the reference to the Minsk Group Co-Chair countries Presidents’ statements.

Despite the repeated calls of the Co-Chairs of the Minsk group for the unconditional implementation of the trilateral ceasefire agreement of 1994 and the agreement on the consolidation of the ceasefire of 1995, signed by Azerbaijan, Nagorno-Karabakh and Armenia, Baku is attempting to question the validity of those documents, by distributing appropriate letters in the OSCE and the UN. Those attempts were failed due to prompt reaction of the Minsk group co-chair states, calling for full respect of 1994-1995 ceasefire agreements.

Azerbaijan has continued the violations, concentrating heavy weaponry and military forces along the entire Line of Contact with Nagorno-Karabakh, further increasing its warmongering and launching a provocative propaganda campaign on international arena trying to accuse the Armenian side in exactly what it is itself doing, thus preparing ground for new military attacks which can have far-reaching consequences for the whole region.

Today, it is imperative to preclude the future reoccurrence of what happened in the beginning of April, to ensure that the dangerous attempts on seeking military solution to the issue will be effectively curbed. The implementation of the confidence building measures proposed by the Co-chairs will certainly serve that purpose, including the creation of the mechanism of investigation for the violations of the cease-fire and capacity enhancement of the team of the Personal representative of the OSCE Chairman-in-Office. Such concrete steps could allow to restore the negotiation environment and continue the peace process.

Armenia will spare no efforts working together with the co-chair countries towards the exclusively peaceful resolution of the Nagorno-Karabakh conflict.
Thank you.