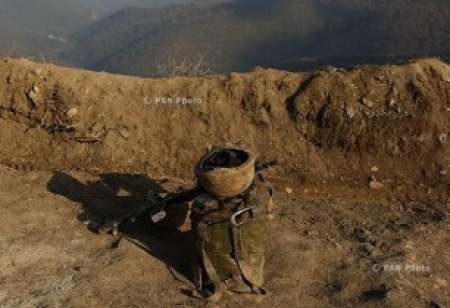 An Armenian conscript was fatally wounded in an Azerbaijani commando raid launched against Nagorno-Karabakh’s frontline defense positions after midnight.

According to a press release by the Nagorno-Karabakh Ministry of Defense, the blatant ceasefire violations overnight saw the adversary release fire from weapons of different calibers and infantry fighting vehicles (30 mines), as well as 60mm mine-launchers (16 mines) and grenade machine guns (32 mines).

More intensive raids were committed in the south-eastern (Hadrut) and eastern (Martuni) directions of the Line of Contact.

The deceased serviceman, shot to death in a southern military unit, was identified as Khachatur V Harutyunyan, 20.

A probe has been launched into further details.

The Ministry says it shares the heavy grief of the loss, extending its solidarity to the family and fellow servicemen of the deceased.

The Ministry further blames the Azerbaijani authorities for the escalations, adding that the entire responsibility for their tragic consequences falls upon that country’s politico-military leadership.