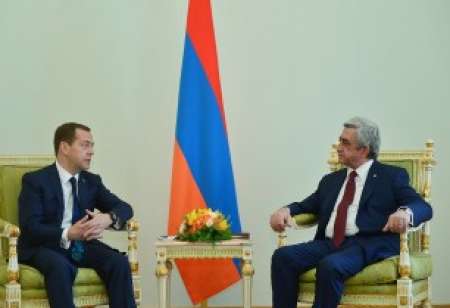 Armenia President Serzh Sargsyan received today the Chairman of the Government of the Russian Federation Dmitry Medvedev, who has arrived in Armenia to participate in the regular meeting of the Intergovernmental Council of the Eurasian Economic Union.

The President of Armenia welcomed the visit of the Prime Minister of the Russian Federation, which is taking place in the framework of the Yerevan session of the EEU Intergovernmental Council and expressed hope that the visit will be productive.

“During your last official visit we discussed the most pressing and sensitive issues of our agenda. I believe today we will continue the conversation because that time was a truly difficult period for our region which resulted from the blatant violation by Azerbaijan of the ceasefire agreements of 1994-95.

The Chairman of the Government of the Russian Federation noted that he was glad for the opportunity to meet again with the President of Armenia and underscored that actually this is the second meeting during one month and according to Mr. Medvedev it is very good since testifies to the level of relations between Armenia and Russia, allied relations existing between the two countries and two nations. “Last time we conducted bilateral negotiations, while today we will be having an extended session of the EEU Intergovernmental Council. We will consider different, first of all economic issues which is useful for all countries. Thank you for the invitation extended to the Heads of Government to conduct this meeting in Yerevan, since this is the first such meeting here. Besides, it is symbolic that the Head of the Eurasian commission also represents Armenia. We will exchange views, and colleagues from the government will report to you on the results. I have no doubt that we will reach necessary agreements, and it, I repeat, will enhance our economies. It is true that my last visit took place under very difficult conditions. I would like to say at once that we in Russia were following closely all developments and within the scope of our abilities were assisting in the resolution of the situation.

It is also important to maintain the ceasefire regime. Within this context we certainly welcome your meeting with the President of Azerbaijan, which took place in Vienna, as well as the efforts undertaken in the framework of the Minsk Group which are being made to maintain the dialogue, to go on with contacts and to rule out in the future incidents such as the last one, considering agreements reached in 1994-95 and of course to establish a more solid peace in the region and to move towards the final resolution of the NK conflict. Rest assured that Russia has always assisted and will continue to assist in the resolution of this complicated conflict. Now, we will discuss with you all pertinent issues,” said the Chairman of the RF Dmitry Medvedev.