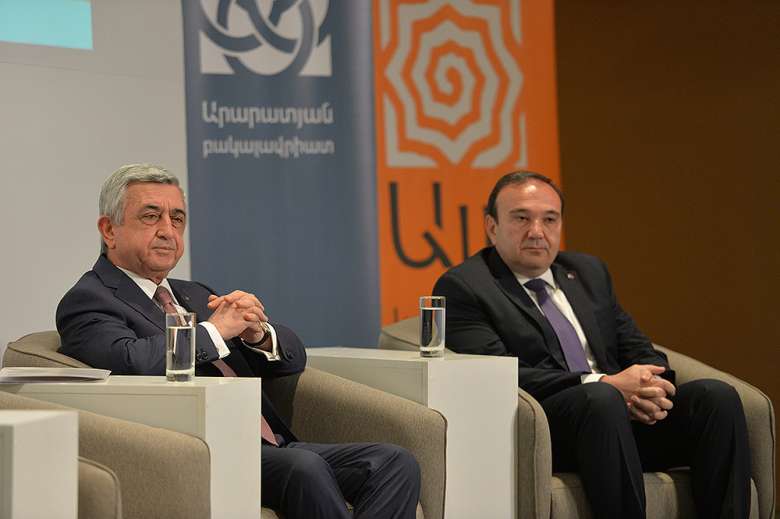 Today, at the Assembly Hall of Matenadaran, President Serzh Sargsyan participated at the event dedicated to the National Program for Excellence in Education (NPEE).

At the event summarized was the entire process of the program implementation, announced was the kick-off of the process on the creation of a net of schools with the Ararat Baccalaureate new educational program and proclaimed were the first schools from the marzes of Armenia and Artsakh enrolled in the program.

In the framework of the event, President Sargsyan handed letters of commendation to the best schools which participated in the creation of the net of schools throught the Ararat Baccalaureate new educational program and the schools which registered impressive results in the subject exams. The President of Armenia greeted the participants of the meeting and congratulated all teachers and educational establishments which received certification in the framework of the Ararat Baccalaureate educational program.

“By the introduction of this program, we make an important step towards the institution of high and established international standards in our school system. For years, we were saying that the best possible education, knowledge-based economy, and high technologies are critical for Armenia’s future. I believe on this we have formed consensus and public opinion long ago, and there is no disagreement in our society on these objectives.

Today, through the Ararat Baccalaureate educational program, we respond to the question how to reach this noble and superb goal. This a national program for excellence in education which means we will be implementing it steadfastly throughout our Republic. In reality, today we have announced the commencement of the first stage of that work.

The Ararat Baccalaureate educational program is also called upon to solve an important social issue. It is obvious that in recent year, serious entrepreneurial activities have been unfolding also in the area of education, and there are already some schools which are conducting a vigour marketing and advertising policy.

We should follow the process closely, monitor the processes going on around the public schools, they should be in the center of attention of the Ministry of Education, our society because very often that competition is not fair and unhealthy, while the advertising should never be built on belittling the others. Public or free of charge school doesn’t mean bad school, while private school surely doesn’t mean that all necessary knowledge is taught there. Standards should be applicable for the evaluation of the entire system. We need to exercise great efforts to assist in the efforts which are undertaken in our marzes, especially in the schools, because it is no secret that schools in our marzes have larger problems related to the material and technical base than the schools in Yerevan. We need to continue this work with confidence that our educational system, our school system doesn’t rest on Yerevan only.

I once again congratulate all teachers and the entire staff of educational institutions on this success. My special gratitude goes to Ter Mesrop and his team because they have put in enourmous efforts. I would also like to particularly thank the teachers who came and easily proved the high level of their knowledge. Yes, they passed exams and there is nothing dishonorable in that, and it’s not about the lack of trust. In general, tests like that should be mandatory in our state administration system and should be held regularly, because any profession is a complex of a constantly renewed knowledge. But at this point, it’s not what I wanted to say: I want to say, dear teachers, that at the end of the day, you proved the simple truth that our educational system did not fail. You gave the answer, and this the best answer to all pessimists who were talking for years that the educational system of Armenia had failed, that we don’t have teachers anymore, etc, etc.

The Minister of Education has said a very important thing here related to the April War. Everybody mentions that our 18-year old conscripts are serving with excellence and defend the borders of our Fatherland. However, they receive these ideas not only in the family but first and foremost at school. Thus, I believe everyone of you sitting here should stress it every time,” President Sargsyan said at this remarks addressed to the participants.

Armenia is a good place to invest in. The interview of Artyom Khachatryan, Co-Chairman of Galaxy Group, with HOTCO
44
2

The result of cooperation between the «Tovmasyan» Foundation, «Goodnes without borders» and «Via Magna Vranov». The first batch of humanitarian aid arrived in Odessa
36
3

The third event of DispruptHR Yerevan 2022, represented and implemented by Cascade People & Business, was held with the support of Galaxy Group of Companies
24
6