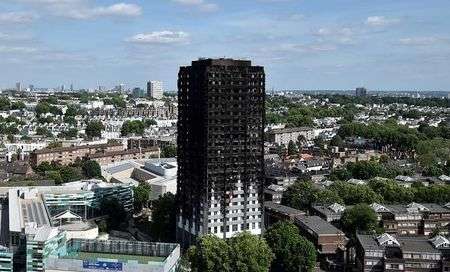 LONDON (Reuters) - Six emails sent by and to an Arconic Inc sales manager raise questions about why the company supplied combustible cladding to a distributor for use at Grenfell Tower, despite publicly warning such panels were a fire risk for tall buildings.

The emails, dating from 2014 and seen by Reuters, were between Deborah French, Arconic's UK sales manager, and executives at the contractors involved in the bidding process for the refurbishment contract at Grenfell Tower in London, where 79 people died in a blaze last week.

When asked about the emails, Arconic said in a statement that it had known the panels would be used at Grenfell Tower but that it was not its role to decide what was or was not compliant with local building regulations.

The company manufactures three main types of Reynobond panel-- one with a polyethylene (PE) core, one with a fire retardant core and another with a non-combustible core, according to its website.

Diagrams in a 2016 Arconic brochure for its Reynobond panels describe how PE core panels are suitable up to 10 metres in height. Panels with a fire resistant core -- the FR model -- can be used up to 30 metres, while above that height, panels with the non-combustible core -- the A2 model -- should be used, the brochure says.

The brochure also issued a blunt warning that cladding can be a fire risk.

"When conceiving a building, it is crucial to choose the adapted products in order to avoid the fire to spread to the whole building. Especially when it comes to facades and roofs, the fire can spread extremely rapidly," the brochure said.

"As soon as the building is higher than the fire fighters’ladders, it has to be conceived with an incombustible material."