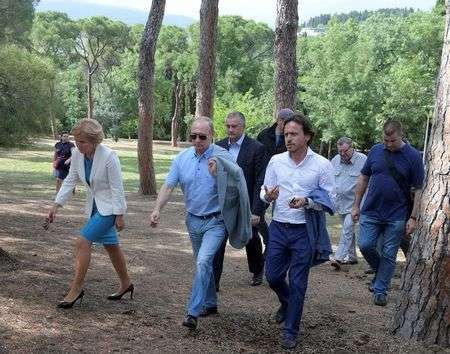 IZHEVSK, Russia (Reuters) - In a stage-managed gesture of benevolence a year ahead of a presidential election, Russia's Vladimir Putin flew 1,200 km (750 miles) to call in on a woman living in squalor and ordered her to be rehoused immediately.

Putin's carefully-choreographed trip to the woman's Urals home, with state media on hand to cover, is part of a pre-election Kremlin drive to project the image of a caring leader as poverty rises nationwide and the economy slows.

Putin is expected to seek another term next March and, though he is all but certain to be re-elected by a landslide, he has shown he is eager to address mounting social grievances across his vast nation of 146 million.

Anastasia Votintseva had complained to the Kremlin leader during a televised question-and-answer session this month that she had to live in unsanitary conditions in a ramshackle wooden house.

She said she was afraid the ceiling would one day collapse onto her children. Putin, live on air, promised at the time to personally visit her and help solve her problem.

He made good on his promise on Tuesday, dropping in on Votintseva and her neighbors who live in a rickety, barracks-style two-storey house in the Urals mountain city of Izhevsk.