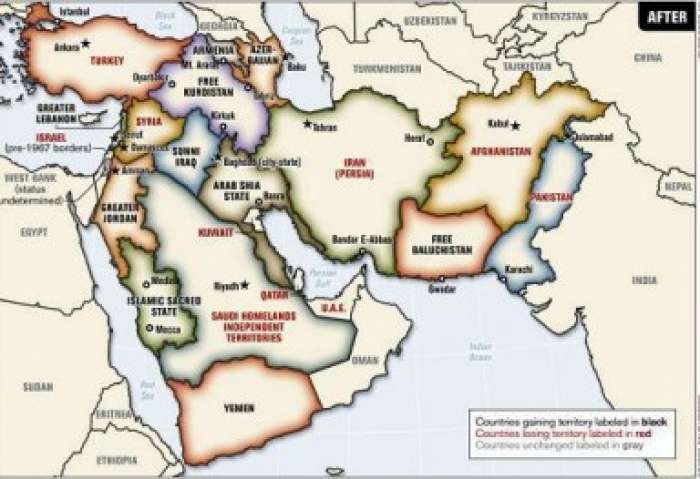 "New Middle East" term was first introduced into the world by the U.S. Secretary of State Condoleezza Rice in Jerusalem, in the June of 2006. Then the same month the American «Armed Forces Journal» Magazine published "The New Middle East" map, the author of which was retired Colonel of investigation Ralph Peters , who had also worked for the U.S. Military Academy. Iraq’s completed, Syria’s 1.5-year-ago-started and Iran’s future reshape, seems to be fully fit in the logic of the map. And although this map does not reflect the Pentagon's official position (Peter Pase, the president of the chairmen of the joint committee of American headquarters, has officially assured about this to the chairman of Turkish chief headquarters, General Yasar Buyukaniti, in the July of the same 2006, however, it was used in the training program of NATO Defense College of the highest military officers, and it is obvious that this was a drain towards touching upon the moods and preparation of public opinions for big changes.
And although this map is intended to join Ardahan in Ghars to Armenia, included Mount Ararat, and Artsakh is left to Azerbaijan, but it is obvious that if Armenia is not ready for unavoidable and crucial events, not depending on it, in military, economic, and most importantly, political and cultural aspects to be inevitable and crucial events, then not only will not get anything, but a lot can lose, especially that according to this project, our fellow Iran is to split up and weaken, and Azerbaijan, is to become stronger. And in case of being ready to the Republic of Armenia may take even more than is meant for it in certain centers (and not only concerning the territories). It has always been.
Armenia's independence in 1991, was a great gift, which we could not use properly in modern progressive, democratic, liberal and military aspects, to build a powerful country. It’s not too late yet , but time is scarce. If in the upcoming presidential elections, the state of Armenia continues to remain in hands of nowadays olygarkhic-placeman comprador capitalists, who don’t see and don’t need anything besides their pockets, who enjoy the lickerish life in casinos, who serve the economic interests of the abroad on the account of their own country’s economy, then…

13.15:30A call to stop military operations and to move towards peace. Anna Hakobyan

13.14:22There are no losses from the Armenian side. The Ministry of Defense announced yesterday and this morning what happened on the Armenian-Azerbaijan border

Դիտվել է 80 անգամCoronavirus: Which countries appear to be hitting or passing their peak in coronavirus deaths?

Դիտվել է 68 անգամItaly reopens borders - but will tourists travel there?

Դիտվել է 36 անգամParis Black Lives Matter protesters: 'Who protects us from the police?'