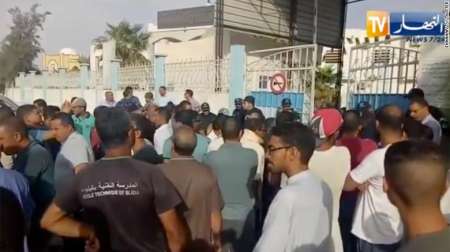 Eight newborn babies were killed in a fire that erupted in a hospital neonatal ward in Algeria on Tuesday, according to private television station Ennahar.

The fire broke out in the eastern El-Oued province's Al-Um Bashir bin Nasser Hospital, according to Ennahar.
"Sources say that the newly-born babies were completely burnt and are difficult to identify," the station reported.
According to the Civil Protection Directorate, the newborns died from burns and smoke inhalation.
It added that 11 babies, 37 women and 28 employees were rescued after the blaze broke out at 3:52 a.m., as "tens" of fire trucks and ambulances raced to the scene.
Algeria's Minister of Health Mohamed Miraoui demanded an "urgent investigation" to identify the cause of the fire, with initial findings pointing to an electric spark, reported Ennahar.
The victims' families gathered outside the hospital calling for an investigation, the TV station said.
Algerian state media has not yet reported the incident.
Այս թեմայով
Լրահոս
27 Feb