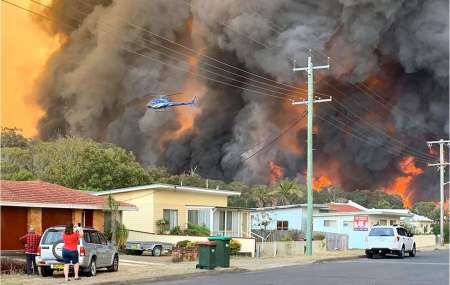 "We have to realise that this is not playing games," Sir David said.

"This is not just having a nice little debate, arguments and then coming away with a compromise.

"This is an urgent problem that has to be solved and, what's more, we know how to do it - that's the paradoxical thing, that we're refusing to take steps that we know have to be taken."

Back in 2018, the UN climate science panel spelled out how the world could have a reasonable chance of avoiding the most dangerous temperature rises in future.

It said that emissions of the gases heating the planet - from power stations and factories, vehicles and agriculture - should be almost halved by 2030.

Assuming they are delivered as promised (and there's no guarantee of that), there could still be a rise in the global average temperature of more than 3C by the end of the century, compared to pre-industrial levels.

The latest assessment by the UN's Intergovernmental Panel on Climate Change (IPCC) lays bare the dangers of that.

It suggests that a rise of anything above 1.5C would mean that coastal flooding, heatwaves and damage to coral reefs would become more severe.

And the latest figures show that the world has already warmed by just over 1C.