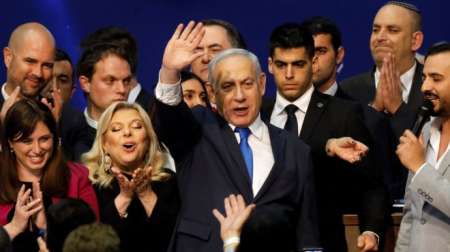 With 99% of votes counted, Mr Netanyahu's Likud party was on track to win 36 seats, and allied right-wing and religious parties another 22.

That would leave them three short of a majority in the 120-seat Knesset.

Likud is encouraging defections from the rival centrist Blue and White alliance, which is set to win 33 seats.

The nationalist Yisrael Beitenu party could also tip the balance with its seven seats, although it has ruled out joining a Likud-led coalition that includes religious parties.

The election was Israel's third in less than a year. Neither of the main party leaders was able to command a majority following the last two rounds.