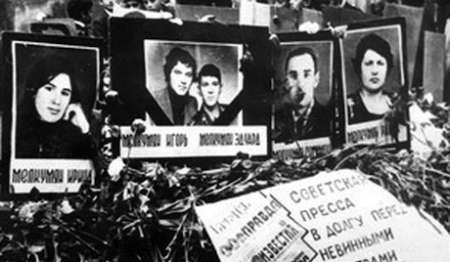 The 25th anniversary of the genocide of the Armenians was marked in Azerbaijan. Unfortunately, the world community still has not given a proper political and legal assessment of this crime of the Azerbaijan authorities, and thus has not secured itself against the future recurrence of genocide in other regions of the world.

The genocide of the Armenians in Sumgait organized by the authorities of Azerbaijan became the answer to the peaceful constitutional decision of February 20, 1988, of the session of the Nagorno-Karabakh Regional Council of People's Deputies on Nagorny Karabakh's unification with Armenia, which integral part it was during the millennia-old history prior to the Soviet period.
On February 27-29, 1988, in the city of Sumgait, located hundreds of kilometers away from Nagorno-Karabakh, there occured mass pogroms and killings of Armenians, crimes against humanity that stunned the world public by its savagery and brutality. During the three days of massacres and pogroms, dozens of Armenians were killed, hundreds were wounded, a huge amount was subjected to violence, torture and harassment, 18 thousand people became refugees. The genocide in Sumgait became the embodiment of hatred for Armenians that was inherent for the policy of the leadership of the Republic of Azerbaijan.
Azerbaijan pogrom-makers armed with metal rods made at factories and other thrust weapons commenced to the implementation of their planned criminal actions. Piles of stones were stockpiled in the centre of the city in order to throw them at motor transport and forces of law and order. In the days of the pogroms, telephones of the Armenian residents of Sumgait were turned off, and, as a rule, they were turned off after people called the militia or the City Committee of the Communist party with the request to help. The phones of many Russian residents were also turned off.

The pogrom-makers knew their tasks very well; they had on hand lists of Armenians and their addresses. Groups of 50-80 bandits broke into the houses of Armenians, killing people, not only in their homes, but they often took them out in the street or courtyard for public humiliation. After severe tortures, the victims were doused with gasoline and burned alive. Thus they destroyed entire families.

The genocide in Sumgait gave the «green light» to new unprecedented crimes against the civilian population in Nagorno-Karabakh, and ultimately led to the beginning of an open military aggression of Azerbaijan against Nagorno-Karabakh in 1991-94.
After the Nagorno-Karabakh Republic was proclaimed in accordance with the norms of the international law and the legislation of the USSR, Azerbaijan undertook a large-scale terrorist aggression. The Baku administration had committed crimes against peace and humanity, such as planning, preparation, unleashing and waging an aggressive war, murder and extermination of civilian population, killing and ill-treatment of prisoners of war, and intentional destruction of towns and villages.

In February 1992, the Azerbaijan leadership committed the murder of their own peoplein the territory of Khojali controlled by the Azerbaijan army, or more precisely in the outskirts of Agdam, whence the continuous bombardment of the NKR territory and attacks on the cities and villageswere carried out.

The Azerbaijan authorities systematically falsify the events in Khojali. The Azerbaijan still library represents computer-edited photos and display other historical events in other geographical locations. Photos that allegedly represent the Khojaly tragedy, in fact, are the photos of the earthquake in Turkey in 1983, Afghan children-refugees, the pogroms of the Alawis in 1978 in the Turkish city of Marash, photos of Albanianskilled in Kosovo, the pogroms in the Balkans in 1999, and picturesof Hamas militants destroyed by the Israeli army.

Today, in Azerbaijan, instead of repentance for endless atrocities and murderous acts, instead of legal procedures against the criminals, weonly see and hear sabre-rattling and threats of revanchism, terrorist calls for shooting down civilian aircrafts, falsification of the facts of history and persistent racist misanthropic insults of the Armenian people. The shameful release and glorification of the murderer with an axe Safarov has once again demonstrated to the world community that in Azerbaijan murder owing to national reasons had been raised to the rank of state policy, and systematic and deliberate lies and breakdowns of international agreements lie in the basis of the Baku policy.