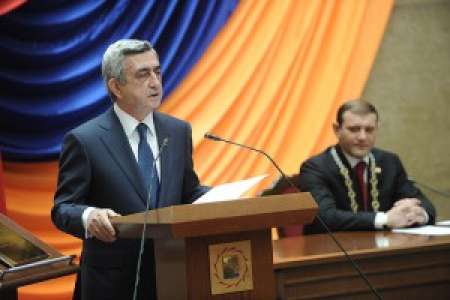 Despite the Taron Margaryan and his campaign team's ongoing campaign, however, the options as insurance in anticipation of the upcoming May 5 elections of Yerevan Council of Elders are numerous, especially considering the thesis published by the U.S. State Department human rights report for 2012, the misuse of public resources in favor of the authorities.

In fact, the subtext of these lines is meaningful enough, if it is not purposeful in the sense of the municipal elections, at least about the system of fundamental ideas it gossips with the factor of the disclosure of electoral mechanisms. It turns out that in addition to using the strategy of quite charismatic misuse of public resources is in favor of the authorities, the wing of the government once again intends to use this approach already in elections of Yerevan Council of Elders, this time is already a fact.

First, it is a fact on the occasion, that all sets of power once again are taking advantage of the situation and position, are trying to prove the purpose of the Mayor and Mayor's office staff that involves asphalt, playgrounds, persistent water, and the solution of such problems.

But beyond all this, the ruling party is taking advantage of another important factor. There are rumors that before the upcoming elections on May 5 conscripts will be given a short vacation that logically implies the existence of yet another indicator provisioning of votes for the Republican Party.

So what do we have? Whether Serzh Sargsyan and his team are not confident of their victory? RPA in any case, is getting ready for any eventuality.

U.S. State Department report for 2012 once again proves that the ruling party ignores any hint or warning, which of course threats national security.

If this election once again repeat the character of the previous ones, in particular, the presidential and parliamentary elections, in all probability, next year the report will include extremely tough and negative evaluations that will lead to self-destruction at the state and statehood.