Why is Serzh Sargsyan against Vanik Siradeghyan? 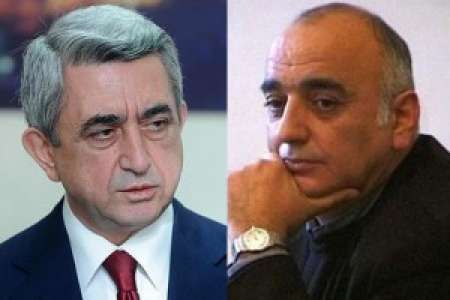 Very informative interview with a major political figure of our time, a direct participant and witness of the most important events, that have close relationship with almost all the members of the Armenian elite, with the person who managed to establish, ANM-RPA alliance and become a connecting link between these two seemingly opposing political forces. This brief conversation took place on Serzh Sargsyan's inauguration day on the steps of the Sport and Concert Complex. As in the following days were more important, interesting questions, and it was, so to speak, not to Gevorik from ANM, recording of the conversation was somehow forgotten.

By the way, during flammable days of 2008, Levon Ter-Petrosyan "trusted" Gevorik from ANM the mission of presenting the opposition set up to investigate the events of March 1 committee. In all probability, from that time Gevorik's world has been subjected to change and Gevorik has believed in liberal ideas of ANM and leaned toward the conservative Republican Party.

-Gevorik, your things are bad, you do not smoke cigars? What is exactly, how do you fit regular cigarettes to meet such dignitaries? Do they badly take care of you?

-That is, allegedly, we are modest, we are with people and for people ... right?

-But how could you not smoke cigars in such a significant day? And then, too, once your suit is not appropriate to today, you get dirty or that ... Is it too deliberate?

-Do not matter. Sometimes happens.

-Today is a holiday. Is it not a holiday for you today?

-Yes, today is a holiday for all.

-Are you going to Raffi Hovannisian's inauguration?

-What will I do there? I never talked to him.

-No, the question is not about the money.

- So what's the matter? Difference of concept?

-Yes, the ideas. At the moment, I respect the Republican Party of Armenia for its ideas and actions in Nzhdeh's style. For me, action of my President of the Republic is more important than all the others.

-Gevorik, you're also a member of the Union of Volunteers "Yerkrapah?" What caused this membership?

-But, at one time you were with ANM. You were just called Gevorik from ANM?

-It does not matter. ANM was an idea that came and went. When my President will be there, then I will go there. My President-Vano Siradeghyan.

-Do you know that in recent years theme of Vano Siradeghyan's return has been intensified?

-It will be difficult.

-Different actions are orginized for Vanik Siradeghyan's return. Do you participate in them?

-It's in his hands, if he wants Vanik will return, if not, then he will not come back.