"Against" Taron and "for" PAP 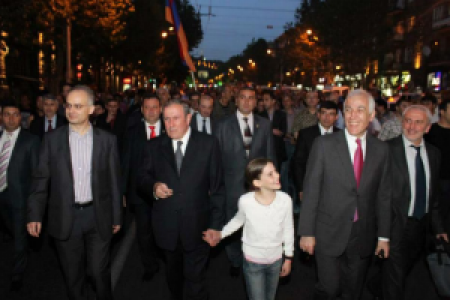 Yesterday a regular meeting was held in Freedom Square, one of those meetings, which are campaigning freedom, justice, and the change of power. There were a lot of speeches during the rally, but in fact, the ideas and thoughts of all the speakers were the same.

It was about everything, starting with the last presidential elections to upcoming municipal elections. However, the key issue was quite different, namely, the attack was against the authorities, in particular against the head of the list of RPA Taron Margaryan. This meeting, in addition to the main campaign, hid a secret meaning and was directed against the regime.

Only after the implementation of Taron Margaryan's black PR, the speakers shifted to issues of the campaign, and it is logical, otherwise the meeting would acquire a ridiculous character, would turn into a protest against the Mayor.

It turns out that those predictions that are relevant for the availability of communication between PAP and ANC, find their review a few days before the election, and will not be surprising if one of these days this relationship fully reveals itself, since such a development scenario, at least one political power can get the other voices that will be a big plus against the election of the Council of Elders.

Of course, if in this situation, each political party is going to expect from its segment of the vote in favor of its own party, then the above-noted case, one can avoid this situation and achieve a positive outcome, as opposed to Taron Margaryan and the current regime.

In this case, the hypothesis of victory already finds its implementation in the upcoming elections. This may be an obstacle to the process of further reproduction of the authorities.