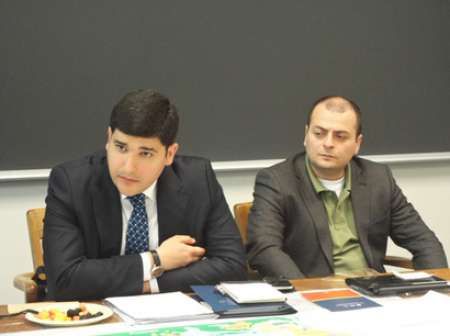 The South Caucasus countries and the world power centers have their own views on the region. But this does not mean that the South Caucasus countries must blindly fulfill the will of big and powerful countries. In any case, Azerbaijan and Georgia intend to form the ways of development in accordance with its national interests, director of the Center for Strategic Studies under the Azerbaijani President Farhad Mammadov said today.

He spoke about "Security issues and conflicts in the South Caucasus" at the "round table", organized at Princeton University (LISD), the center said on Saturday.

He added that the South Caucasus could not turn into a powerful region in terms of political, economic or cultural integration.
The cooperation between Azerbaijan and Georgia is a positive example. But Armenia isolated itself from the regional integration process as a result of its aggressive policy.

The occupation of 20 percent of Azerbaijani territory, the ethnic cleansing policy against Azerbaijanis in Nagorno-Karabakh and seven adjacent regions compelled Azerbaijan and Turkey to close the border with that country.

He added that Azerbaijan and Georgia are developing amid the conflicts in their territories and even partial occupation.
"We have achieved the implementation of all geo-economic projects and form own economic goals for the next ten years," he said. "However, we can not say this about Armenia, which failed to bring its economic development to the level of 2008. Moreover, Armenia's militarization reached the highest level. Armenia's military budget exceeds 5.5 percent of its GDP."