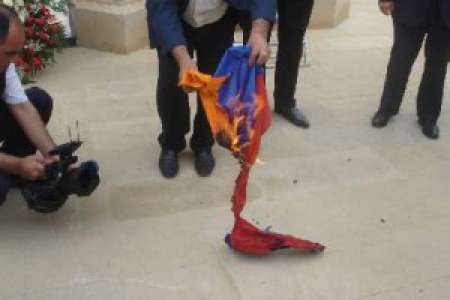 Members of the Alliance for Free Karabakh visited the Alley of Martyrs on the anniversary of Shusha’s occupation, prayed for the souls of martyrs and laid flowers at their graves.

APA reports that the visit ended with trampling down the Armenian flag. Following this, the Armenian flag was burnt and a brief rally was held in front of the Eternal Flame. The heads of companies including the Alliance Akif Naghi, Firidun Mammadov, Rovshan Ahmedli and others delivered speeches. Chairman of the Organization of Karabakh Liberation (OLK) Akif Naghi said that burning of Armenian flag symbolizes hatred of the enemy: “Armenian fascists have occupied our Shusha and other territories of Karabakh, and are trying to armenianize them. Our hatred will last forever. We demand the government to start a war. We are asking the government: How long will you endure the occupation and disgrace?” Alliance members finally visited the Turkish Martyrdom Monument.