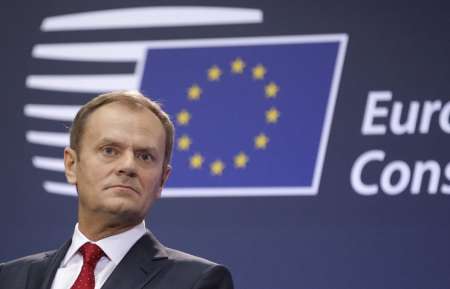 The European Union will react promptly in case recently reached agreements in Minsk on the settlement of the ongoing Ukrainian conflict are breached, Donald Tusk, the president of the European Council, said.
Speaking at a news conference in Brussels Tusk said the European Union would be ready both for good and bad developments but if the Minsk agreements were breached the EU would resort to all the necessary measures.
The Normandy Four leaders - Russian President Vladimir Putin, German Chancellor Angela Merkel, French President Francois Hollande and Ukrainian President Petro Poroshenko - met in the Belarusian capital of Minsk on Wednesday night in a bid to find a way for the Ukrainian crisis settlement.
The key negotiations, which started at 8:15 p.m. Moscow time (17:15 GMT) on Wednesday, lasted for around 16 hours. The high-ranking participants of the marathon talks in Minsk agreed on ceasefire from midnight, February 15.
According to Tusk, leaders of the EU member states thanked German Chancellor Merkel and French President Hollande for all their efforts to settle the Ukrainian conflict, but cautiously approved the outcome of the talks in Minsk.
The president of the European Council added that the implementation of the newly agreed ceasefire between the conflicting parts in the southeast of Ukraine was one of the most important provisions at the moment.
The previous ceasefire between Kiev authorities and defense forces of the self-proclaimed republics in the southeast of Ukraine was reached in September with the mediation of the Organization for Security and Cooperation in Europe (OSCE).
The ceasefire was agreed upon on September 5 at talks between the parties to the Ukrainian conflict as well as the OSCE representatives. It was reached in the Belarusian capital Minsk two days after Russian President Putin proposed his plan to settle the situation in the east of Ukraine.
However, numerous violations of the ceasefire, which took effect the same day, have been reported since. The situation in the southeast of Ukraine deteriorated further with the start of this year as military clashes intensified resulting in numerous casualties on both conflicting sides.
The deterioration in Ukraine prompted a diplomatic blitz from Hollande and Merkel last week as they went first for talks with Poroshenko in Kiev on Thursday and then met with Putin in Kremlin the other day.
Thousands have been killed and hundreds of thousands of people have fled Ukraine’s embattled east as a result of clashes between Ukrainian troops and local militias in the Donetsk and Lugansk regions during Kiev’s military operation, conducted since mid-April 2014, to regain control over parts of the breakaway territories, which call themselves the Donetsk and Lugansk People’s republics.