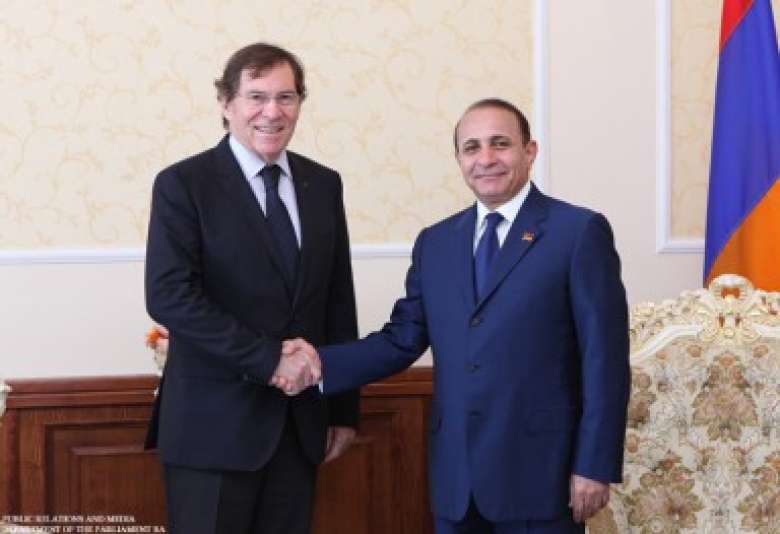 On May 30 the RA NA President Hovik Abrahamyan received the President of the Parliamentary Assembly of the Council of Europe (PACE) Jean-Claude Mignon, who arrived in Yerevan to take part in the meetings of the PACE Bureau and the Standing Committee.

Welcoming Mr Mignon’s first visit to the Republic of Armenia, the President of the National Assembly noted that it was taking place during a very important event for Armenia, in the presidency of Armenia in CoE Committee of Ministers. “The first presidency of Armenia in the Council of Europe is a significant event for our country. This is a unique opportunity for Armenia to have its contribution and participation in the formation of the agenda of the Council of Europe aimed at democracy, human rights and rule of law, all-human values in the member countries.” Hovik Abrahamyan has noted that Armenia greatly highlights the cooperation with the Council of Europe, as well as the support of the organization in the democratic reforms going on in our country. Touching upon the NK problem, the NA President Hovik Abrahamyan stressed that Armenia had been resolute to continue its efforts directed at the solution of the problem through peaceful means. Hovik Abrahamyan once again reiterated that the Armenian side saw the solution of the problem only in the Minsk Group format, through peaceful negotiations, based on well-known three principles – nations’ self-determination, territorial integrity and non-use of force. “However, Azerbaijan with its bellicose posture leads the process to a deadlock, and because of this position progress is not registered,” the NA President said.

The PACE President Jean-Claude Mignon highlighted the democratic reforms going on in Armenia, in this context highly assessing the role of the parliament. Congratulating Armenia on assuming the presidency in the CoE Committee of Ministers, the PACE President noted that an important and historic opportunity had been created for Armenia to advance the CoE political agenda and assured that he would display his support in the implementation of the initiatives during Armenia’s presidency. Touching upon the settlement of the NK problem, Mr Mignon noted that it should be solved within the framework of the OSCE Minsk Group, as a result of peaceful negotiations and on the basis of the Madrid principles.

In the course of the meeting other issues were also discussed.

Government will stand by each investor's side: Hovik Abrahamyan

We will form a new professional Government with the support of the President of Armenia. Hovik Abrahamyan