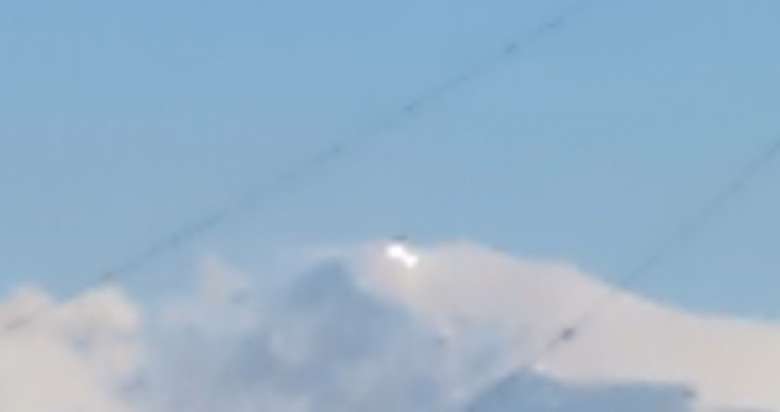 God with Illuminating Cross on the top of Biblical Ararat has announced us about his presence and sent a Message either of warning or good tidings. The Illuminating Cross first was noticed this year on 20 March and photographed from Yerevan. The thoughts about the divine miracle will be considered later.

First, let me assure you that the story is neither a fiction nor a fabricated sensation. I absolutely realize that generally and for Armenians especially it’s inadmissible to get on patriotic and religious senses to abuse the situation and use the words God and Ararat.

Moreover, such treatment means committing a sin. I’m obliged to write about the fact that within the frames of mass media chaos and irresponsibility are fused with the truth. Speech freedom is abused every single day and hour. Among lots of fiction and fake information - so called spurious news it is very difficult to differentiate true and false.

I would like to emphasize the fact that this is not the case when the information source is not mentioned i.e. unknown; vice versa, the eyewitness and other data will be presented below.

Actually, there are photos with Illuminating Cross on the top of Ararat, which can be given to Mother See of Holy Etchmiadzin for further verification.

Now I would like to introduce the main story. The Illuminating Cross on Mount Ararat was first seen and photographed on 20 March 2016 by Angelina Janoyan, a lecturer at Yerevan State Medical University. She noticed and took a photo of it again by her mobile phone a month later, on 20 April.

Mrs Janoyan lives in Yerevan, capital of Armenia, with a wonderful view on Mount Ararat from her apartment window. Angelina herself, mentioned by a journalist friend of mine (she doesn’t work as a journalist currently and suggested me to write about it), is a great patriot as well as a believer. Every day if it isn’t cloudy, by all means she looks at Ararat, greets and has a silent conversation with the Biblical Mount. Then, before going to work she comes up to the window, says good-bye to Ararat and only then leaves her apartment.

Perhaps it is not surprising that the luck of seeing and photographing this divine miracle on her adorable Ararat (Masis) was given to her.

“On 20 March 2016 on Advent Sunday before Easter, at about 14:30-15:00, I was at home. While looking at Ararat and greeting it, I noticed the Illuminating Cross on the top. - told Angelina Janoyan to the reporter of Lurer.com.
Immediately I rushed to my son’s room to fetch the binoculars (received earlier as a gift). Despite the fact that even with a naked eye the Cross was obviously seen, lying on the top of our Saint Mount Ararat , my impressions multiplied exultingly while I was observing it, as the Cross was not only shining but also illuminating with white light and along the Cross shape it was flaming with circles as on the Sun surface. Afterwards my operative steps followed. I wanted to find out whether this lucent object on Mount Ararat was seen from other parts in Yerevan as well or not. I was informed that some real beaming light could be identified without any clear picture due to the comparatively low location of ‘Kentron’ (Center) district of Yerevan, which only allowed for the view from below. Furthermore, I turned to my mobile to catch the moment but unfortunately, the pictures couldn't reflect the real illumination and beaming. I believe that the Advent Sunday was trying to send a sacrament, a message since the phenomenon I noted was truly extraordinary. I have never noticed this Cross before during my daily observations. The shimmering Cross had illuminated for 30-35 minutes and then vanished away’’. According to Mrs Janoyan the same vision reappeared a month later, on 20 April with a brighter illumination.

“On 20 April between 16:00 - 16:30, I noticed the shimmering Cross on the top of Ararat again from the taxi on my way home. - our interlocutor continued - The taxi driver witnessed this as well and commented as if speaking out my own thoughts, that it was a sacrament to the Armenian people on those difficult days – Armenian Genocide Remembrance Day in 24 April, (1915-2016) and Azeri aggression since the beginning of April, 2016. The moment I got home, I took the binoculars again to check whether it was the same image as in March. It really was, but this time the Cross illumination was brighter and more expressive. The same light flaming and an ardent process was going on for about 30 minutes, which gradually stopped and disappeared without any shadows. My colleagues, friends and me have been observing the top of Ararat with the same wonderful weather condition but there was nothing like that, even thin and gentle lines of Cross. They were extremely curious about it because they haven’t seen anything like that before and ever. Having noticed this miracle of the Illuminating Cross on the top of Ararat, I would like to share it with my dear Armenian People and the World”.

Naturally, a question may arise on why I believe it to be our God sending us the message through this shimmering Cross on the top of Ararat, why I believe this to be а miracle from heaven. For a very simple reason - no other interpretation can be found despite my far from weak imagination. Even more, I can't imagine anybody who could find any other interpretation, because the vision of the Illuminating Cross on the top of Ararat cannot be explained by a well-known optical phenomenon in the atmosphere i.e. mirage. If any of the scientists can give a scientific explication, I will readily have a look at it.

Everybody knows that Christian Cross as a geometric image is not a random one. It has certain symmetry and is the main Christian Saint Symbol, which expresses the meaning of Resurrection and Salvation. Therefore, why it wasn't any other asymmetric image or even symmetric one (e.g. equal sided cross) on the top of Ararat?

Second, the Illuminating Cross could appear in thousands of other places. In that case, why did it appear on the top of our Saint Mount Ararat?
Third, the Cross could be green, black, blue or any other color, why was it white and illuminating?
Fourth, why did it appear on Advent Sunday before Easter and for the second time the same day of the next month before 24 April, Armenian Genocide Remembrance Day?

And finally, is it really a coincidence that the name of a person who saw, took the photos and announced about that Cross is Angelina? I don’t think that all this could be a coincidence. At the same time, I understand that faithless people or atheists can have adverse opinion. If it is their opinion let it be a well-reasoned one and prove the coincidence of all the facts. In Armenia there have been amazing, inexplicable things or even miracles before that as well which can’t be scientifically explained and will be presented in our next articles.

P.S. After the article was published in Armenia, more eyewitnesses confirmed the fact of Cross Illumination on the top of Biblical Saint Mount Ararat (Masis).

Armenia Wine Cognac - One of the Best in the International Competition

«We stand with the Armenian community against violence». Major of LA Eric Garcetti

"I stand with my fellow Armenians and pray for those that are involved in resent tensions on the border of the country". Kim Kardashian expressed her support to Armenia in defense from Azerbaijan's attack

After a hot battle, the enemy was thwarted back suffering losses at night

There are no losses from the Armenian side. The Ministry of Defense announced yesterday and this morning what happened on the Armenian-Azerbaijan border

Italy reopens borders - but will tourists travel there?

Missouri: Brothers, six and seven, die after crashing their grandparents' car into tree

Coronavirus: Which countries appear to be hitting or passing their peak in coronavirus deaths?

Google in $5bn lawsuit for tracking in 'private' mode

LONDON LOCKDOWN What does lockdown mean and when could it start in London?

'Nature is taking back Venice': wildlife returns to tourist-free city

Coronavirus: When will the outbreak end and life get back to normal?

Deadly tornadoes kill 25 and injure many in Tennessee

Ameriabank as a Promoter of Armenian Culture: Launch of “An Armenian Odyssey: The Color of Pomegranates” Festival

Man arrested in Peru airport with 20 birds in suitcase

There are no losses from the Armenian side. The Ministry of Defense announced yesterday and this morning what happened on the Armenian-Azerbaijan border
84
2

"I stand with my fellow Armenians and pray for those that are involved in resent tensions on the border of the country". Kim Kardashian expressed her support to Armenia in defense from Azerbaijan's attack
56
4

A call to stop military operations and to move towards peace. Anna Hakobyan
40
5

After a hot battle, the enemy was thwarted back suffering losses at night
32
7

«We stand with the Armenian community against violence». Major of LA Eric Garcetti
12
8

“Ameria Tour” Draw: Chance to Explore Armenia with Us
136
1

There are no losses from the Armenian side. The Ministry of Defense announced yesterday and this morning what happened on the Armenian-Azerbaijan border
84
2

"I stand with my fellow Armenians and pray for those that are involved in resent tensions on the border of the country". Kim Kardashian expressed her support to Armenia in defense from Azerbaijan's attack
56
4

A call to stop military operations and to move towards peace. Anna Hakobyan
40
5

After a hot battle, the enemy was thwarted back suffering losses at night
32
7

«We stand with the Armenian community against violence». Major of LA Eric Garcetti
12
8