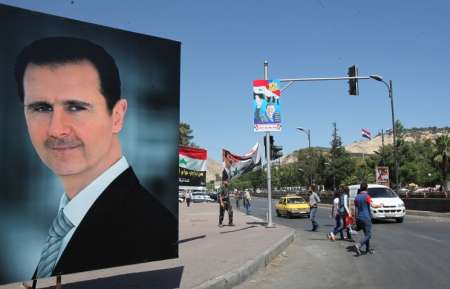 Bashar Assad has won a convincing victory in Syria's presidential elections. With a voter turnout at 73.42% (11.6 million people), the incumbent president received 88.7% of the vote (10.2 million people). These are the official results given by Mohammad al Lakham, Speaker of the Parliament of the Syrian Arab Republic.

The two rivals of Assad remained far behind. Hasan Abdel Illahi al Nuri, 54, a businessman and ex-minister, polled 4.3% of the vote, and Maher Abdul-Hafiz Hajjar, 46, a Communist from Aleppo, polled 3.2% of the vote. Assad's convincing victory is indicative of a country-wide support for the incumbetn president, who has been re-elected for a third term.
International observers in their final communique recognized the legitimacy of the polls.

Syria's foreign minister stated that the elections would become "the starting point of a political settlement". He said Syria "returns to the safe coast so as to start a post-war reconstruction and reach a comprehensive accord".
Political experts in the region begin to make forecasts for probable initiatives by Damascus in the light of Assad's triumph. Mohammad Ballout, columnist of the newspaper al Safir, in particular, expects that Damascus will form a broad coalition government, with a suggestion that oppositionists abroad also join it "provided they are ready to break off with their outside sponsors".

According to Ballout, 13 ministerial portfolios in a future Cabinet will be allotted to oppositionists and independents.
The elections were held for the first time on an alternative basis. In accordance with the 2012 Constitution, the president is elected through universal direct voting for a term of seven years and may be re-elected only once.