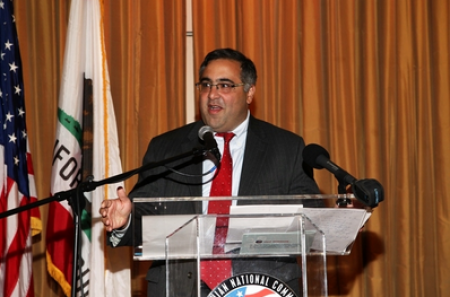 The Obama Administration must forcefully condemn Azerbaijan’s downing of an unarmed helicopter flying over Nagorno Karabakh and cut off all military aid to Baku. The Armenian National Committee of America Executive Director Aram Hamparian put forward this suggestion.

As reports “Armenpress”, Hamparian particularly underscored: “The Obama Administration must forcefully condemn Azerbaijan’s downing of an unarmed helicopter flying over Nagorno Karabakh, cut off all military aid to Baku and scale back bilateral contacts until President Aliyev ceases his aggression against Artsakh and Armenia. Our White House needs to give up on the long-ago discredited idea that there is some sort of parity between the parties. The facts are clear, and should guide U.S. policy: Artsakh is a democracy offering its hand in peace; Azerbaijan is a dictatorship escalating its anti-Armenian aggression. America should stand on the side of peace and democracy.”

The ANCA has initiated a video call to action to secure additional statements from Congress in this regard. Previously it was reported that in the airspace of the eastern sector of the Karabakh-Azerbaijani border, in the result of the violation of the ceasefire regime, the Azerbaijani Armed Forces shot a helicopter Mi-24 of the Air Forces of the Nagorno Karabakh Republic during a training flight on November 12 at 13:45. The place of the shot is very close to the line of contact. The press service of the Defense Army of the Nagorno Karabakh Republic informed Armenpress that the rival continues firing in the direction of the incident. The details of the incident are being investigated. Later it was announced from Stepanakert that by preliminary data there are three victims. The Commander of the staff was the Major Sergey Sahakyan.