Double Tree by Hilton hotel has opened in the capital 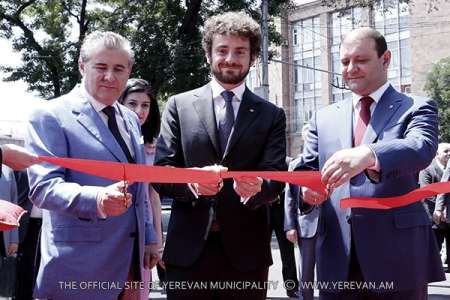 President Serzh Sargsyan together with Yerevan Mayor Taron Margaryan and the RA Minister of Economics Karen Chsmarityan were present at the opening ceremony of Double Tree by Hilton hotel which is a part of world-famous hotel chain “Hilton Worldwide”. The opening was performed by Yerevan Mayor Taron Margaryan, General Manager of “Renko” company Giovanni Rubini, shareholder of the company Giovanni Gasparini.
The President of the Republic and the Mayor walked about the hotel complex corresponding to the requirements of the international high class hotel brand, familiarized themselves with the investments, work done and the quality of the services. Double Tree by Hilton hotel was built within the frames of the treaty of cooperation between the state and private sector in the area of the former cycling track, by “Renko” company. The construction lasted 16 months and during that period the company employed 500 employees. According to the persons in charge, the personnel of the hotel will be consisted of about 200 employees. During the tour the President and the Mayor were presented the ecological project for the rest of the are of the former cycling track: green zones and fountains are to be constructed here so that the public and commercial area will become more attractive. The company plans to carry out the construction activities within 5 years making investments of 130-150 euro.