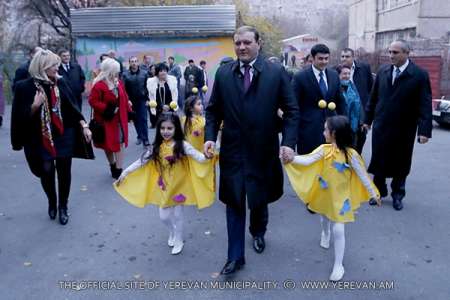 The activities started in the administrative districts since the beginning of the year within the frames of the municipal programs provided for 2015, have been mainly over. This time Yerevan Mayor Taron Margaryan visited Malatia Sebastia and Ajapnyak administrative districts and accompanied by the heads of the districts familiarized himself with the work done. Within the frames of the program aimed at complete renovation of cultural establishments large-scale work has been carried out in the cultural center of Malatia Sebastia district. Mayor Taron Margaryan assessed the work done and talked to the pupils of the establishment and their parents. Expressing gratitude to the Mayor for consistent work they pointed out that the program is really important from the point of view of national culture preservation and upbringing the generation appreciating culture and its significance. The principal of the cultural center noted that after the renovation had been finished and all necessary conditions provided the center opened its doors for about 300 pupils. The persons in charge expressed confidence that due to the renovation the number of children attending the clubs would increase. Expressing gratitude for appreciation Mayor Taron Margaryan assured that the program would be long-term and that in the years to come proper conditions would be provided in all educational and cultural establishments of the capital.
Afterwards Mayor Taron Margaryan accompanied by the head of the district Artak Alexanyan visited the SNCO ''Librarian system'' which had also been renovated within the annual municipal program.The renovation was really expected the children attending the library assured that they would go on attending the library with greater pleasure due to comfortable conditions provided here. Taron Margaryan also talked to the contemporary writers invited to the library and attaching importance to the Mayor's consistent policy aimed at the improvement of library conditions pointed out that it's an important step to making the younger generation be fond of reading. Presenting the visitors and the staff of the library the details of the programs aimed at the improvement of conditions in libraries the mayor informed that currently there are no libraries in the capital where renovation hasn't been carried out.
‘'We have been carrying out large-scale activities aimed at renovation of municipal libraries since 2012. 36 libraries have been renovated. We have 19 municipal libraries with their 18 branches and 3 archives and all of them have been renovated.The program was really expected as some libraries had never been renovated'', said the Mayor adding that the book fund was also being enriched. Thus, only this year we have distributed to libraries 11.000 books of 170 names.
\\ We also take steps to provide the libraries with computers and other up-to=date equipment. Concrete steps are being taken to having electronic literature funds. And I am sure that our citizens will again start make use of libraries with pleasure'', said the Mayor.
In Ajapnyak district the activities provided for by municipal programs have been mainly over too. After the visit Mayor Taron Margaryan instructed the head of Ajapnyak district Artavazd Sargsyan and other persons in charge to pay attention to residents' reception in accordance with the schedule and to keep in touch with the population of the district, to hear out their suggestions and notes and to take them into account.