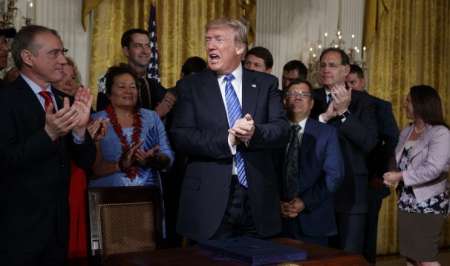 On TV Sunday, President Trump lamented “the disaster stories” of veterans forced to wait several months for health care services through the Department of Veterans Affairs.

“People are waiting on line seven, eight, nine months to see a doctor — or worse, they have a disease or a problem or a form of cancer that’s easily and quickly curable and they have to wait six, seven, eight months and by the time they get in, it’s terminal,” Trump said in an interview on Fox & Friends Sunday.

But for Kelly Gregory, an Air Force veteran whose stage-4 breast cancer has spread to her spine, losing access to treatment through Medicaid would be the real disaster story.

Gregory is one of 1.75 million veterans in the U.S. who relies on Medicaid for health insurance. Last week, she and other veterans from around Tennessee called on their elected officials in the Senate to oppose the proposed Republican health care legislation, which includes significant cuts to Medicaid.

“If [you] pass this, I will die,” Gregory told the Tennessean.

On Friday, Trump, who campaigned on a pledge to overhaul the troubled Department of Veterans Affairs, signed the Accountability and Whistleblower Protection Act into law — promising to make it easier for whistleblowers to report misconduct within the agency and for problematic employees to be fired.

“We must fulfill our duty to the nation’s veterans,” Trump said Friday during a signing ceremony for the first of many pieces of legislation he aims to pass regarding the Department of Veterans Affairs.

But for many of the nation’s veterans who do not qualify for health insurance through the VA, Trump’s act to restore faith in the agency was overshadowed by significant cuts to Medicaid included in the Senate health care bill unveiled last week.