RPA moved to a bigger attack 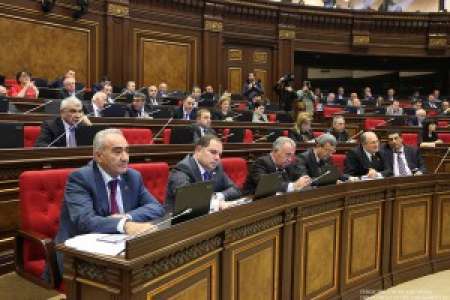 Several representatives of the top tier of the Republican Party of Armenia have recently assured supposedly in connection with elections of Yerevan Council of Elders, we can say, everything has been decided: Taron Margaryan has «no problem». After an hour of statements in the National Assembly, however, this represented more than credible information seemed doubtful.

The content of speeches of MPs, as a rule, shows what target is set and that it underlies. When dawns and sunsets are quiet performance of deputies also breathes silence. It is natural that during the campaign our elected deputies could not avoid the topic of elections and did not put their penny in the victory of "Taroooon Andraniiiikovich Margaryaaan," but then, that the RPA could organize such an attack and openly respond to black PR from the highewst department of the country, it was a little unexpectedly.

The new version of Heritage will be after May 5, as the old came out of production. ARF should not have to fake, as there is no demand in the market."

The do it specially, journalist of the newspaper "Haykakan Zhamanak" Lusine Barseghyan replied. Nikol's ANC's river does not flow in one channel after the wiretapping conversations of Oskanian-Zourabyan. What aspires to reach RPA, praising Nikol to exacerbate relations Pashinyan-ANC? But why? Do they feel the threat by Nicola or is there another reason? In any case they attack when feel threatened.

Attack continues, fresh forces come to the arena. Two Artaks of the Republican Party, Zayaryan and Davtyan praise Taron Margaryan and lead ruthless struggle against competitors. Artak Davtyan was so confused in his speech that even began to express philosophical thoughts: "For me there is no ARF, ANC, "Heritage" party, types of landscaping ...".

Margarit Yesayan goes even further. "PAP and the ANC promise mountains of gold, whose elders in the past four years literally brought to inactivity. Representatives of PAP did not expresse articulate thoughts or words, did not make any particular case, and in the course of the campaign, none of them was able to present what they had done over the year, as they did nothing. ANC also did not participate in the management of Yerevan. Now they are so active, like going to the presidential and parliamentary elections. If they had so much energy, why they were not so active in February."