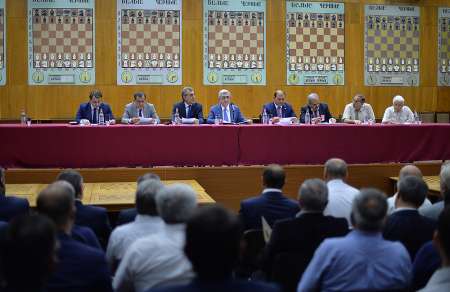 The Chess House after Tigran Petrosyan hosted today a meeting of the Chess Federation of Armenia (CFA) held to hear performance reports and elect new top executives, chaired by CFA President, President of the Republic of Armenia Serzh Sargsyan.

Before proceeding to the agenda, the attendees held a minute of silence in memory of their late colleagues - Ashot Anastasyan, Gagik Hovhannisyan, Stepan Avagyan, Armen Nikoghosyan, Eduard Mnatsakanyan, Robert Buniatyan and Albert Arutyunov - who passed away over the past four years.

Down to the agenda, the conference summed up the activities carried out by the Federation in 2013-2017, outlined the upcoming tasks, heard the report of the Audit Committee, after which the CFA President and Presidium were elected. Current issues were also discussed.

The work done during the reporting period was presented by CFA First Vice President Smbat Lputyan. After discussing the report, the conference assessed it as positive. Chairman of the Audit Committee Armen Gevorgyan introduced the Committee’s findings, which were approved by the conference delegates.

In line with the CFA Charter, the Presidium approved the candidacies of vice presidents, executive director and secretary-general who are members of the Federation Council. Smbat Lputyan was elected First Vice President of the Federation. Taron Margaryan and Levon Yolyan will serve as vice presidents, Hrachik Tavadyan as executive director and Michael Andriasyan as secretary-general. Vanik Zakaryan was re-elected to the office of Honorary President of the Armenian Chess Federation.

The meeting next approved the list of federation commissions and commission heads. On behalf of the Armenian Chess Federation, CFA President, President of the Republic of Armenia Serzh Sargsyan awarded Tigran Petrosyan’s gold medal to two meritorious veterans of the Federation - Yuri Arustamyan and Alyosha Khachatryan.