Movses Gorgisyan: "Long live the Armenia of the future ... (video) 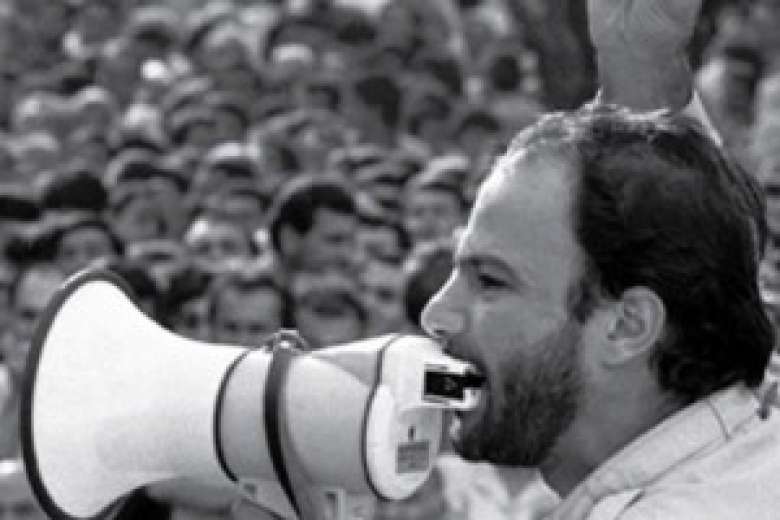 In 1990, this day one of the most outstanding personalities of the Third Republic, the National Hero of Armenia Movses Gorgisyan was killed...

Movses Gorgisyan's activity during the national liberation movement of 1988-1990 played an important and decisive role in the events of those years. Movses was a real hero, a real fighter, always striving for justice. His words "Mourning is eternal, if there is no struggle," is the best way to characterize him.

Movses Gorgisyan was born in 1961. He graduated from the department of culture of State Pedagogical Institute and later worked a stage director at Goris Drama Theater. he was honored as national hero in 1996.

Since 1987 - member of the national liberation movement.

On 28 May 1988 after a 70-year hiatus, Movses dared to raise the Armenian tricolor above the square in Yerevan, despite the possible negative reaction from Moscow - the center of the Soviet Union. The most significant were the marches of the 7th and 29th November in 1989, during which Armenia got rid of arms and flags of the Soviet Union and the Armenian SSR. In 1987-1990 he was arrested six times and spent a month in isolation. He was the editor of "Publicity" and "Homeland."

In 1989 he became one of the co-founders of "Independence of Army."

In 1990 there were rallies in Yerevan and Artsakh when there appeared news that Azerbaijanis started a war in Yeraskh. It was the time when the national army had not been formed yet, but the people and Movses understood that they could not keep the country with pretentious speeches and it's impossible to protect the borders of the country with these speeches. They were well aware that the only way was the creation of volunteer detachments.

On 19 January 1990 the situation was deteriorated in Eraskhavan. In order to prevent threats, many self-defense units rushed to Yeraskh. Moses made an inspirational, rousing speech for his comrades.

Movses Gorgisyan was buried in Tsitsernakaberd. National Hero Gorgisyan was awarded posthumously (09/20/1996), he was also awarded the highest order "For the Motherland" of RA.