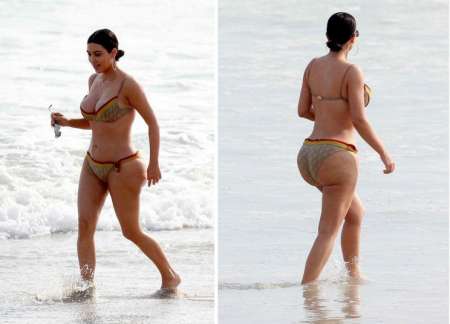 Wearing a vintage Dior bikini, Kim’s body appeared to show a bit of cellulite. Completely normal, of course, but the media had a field day.

Now, Kim has responded to the “fat-shaming,” claiming that the unflattering photos were Photoshopped to make her look “way worse” than she really did.

Appearing on The View on Tuesday, Kim said that she remains convinced that those photos were edited: “I saw these awful photos of myself when I was on a trip in Mexico and people were Photoshopping them and sharpening them.”

“I definitely was not in my best shape,” she added. “I hadn’t worked out in about 12 weeks, I’d had two surgeries on my uterus.”

She went on to explain how the photos had kickstarted a new fitness and diet regime, saying: “I was already not feeling like myself. When people were making [the photos] look way worse, I was like ‘OK, I’m going to get it together’ and I started working out with this bodybuilder girl.